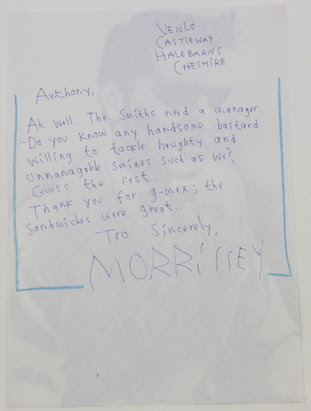 Ah well. The Smiths need a manager. Do you know any handsome bastard willing to tackle haughty and unmanagable swines such as we?

Thank you for g-mex; the sandwiches were great.

Undated letter from Morrissey to Tony Wilson. Presumably, from the G-Mex reference, it was written shortly after FAC 151 The Festival of the Tenth Summer in 1986. Is Morrissey really asking AHW if he would like to be the manager of The Smiths?
cerysmatic at 09:00
Share